The European Organization for Nuclear Research, or CERN for short, is the world’s top physics research organization and home to the largest particle physics laboratory on Earth.

With the goal of uncovering the secrets and mechanics of this universe we inhabit, CERN carries out extensive research and experiments in which new particles, such as the Higgs boson, are discovered.

Those particles, by the way, are what make up you, me, and everything in between.

Naturally, a pinnacle of human innovation must always remain in the vanguard of technological progress, something that cannot be achieved without the power of connectivity that makes complex and intricate systems operate as one cohesive whole that’s greater than the sum of its parts.

To that end, CERN has partnered with Teltonika Networks and incorporated its networking devices in some of its innovative research tools.

ONE ROBOT TO DO IT ALL

The first of those tools is the CERNbot, which is about as close as an IoT solution can get to being a literal Swiss army knife.

This multipurpose robot is a marvel of adaptability, capable of accomplishing a myriad of different tasks in hazardous environments unfit for human hands.

CERNbot’s adaptable nature results from its ability to customize and upgrade itself with external “add-ons” that connect to its core.

From sample extraction, installation, reverse engineering, milling, lifting, quality control, chemical monitoring, and more, the list of research tasks CERNbot is responsible for is quite a long one.

The trick is versatility in the range of interfaces it can connect via and the reliable and stable internet connection established and maintained between the external hardware and CERN’s internal network.

So which connectivity device can help it accomplish that, and where in CERNbot’s core does it fit? Find out that and more in this use case.

Another tool routinely used by CERN is the Train Inspection Monorail, or TIM for short.

While TIM is somewhat of an extension of the CERNbot, it serves a very specific role in the Large Hadron Collider – a 27km (16.7 miles) tunnel where particles are accelerated up to just under the speed of light.

This very much necessitates rigorous control of environmental variables within the Collider, ranging from oxygen levels and temperature to the status of the tunnel’s thousands of supercooled electromagnets and other structural pieces.

That’s where TIM comes in, being a mobile vehicle that houses different sensors and cameras and goes around the tunnel, surveying it and collecting data.

But that data needs to reach CERN’s internal network in real-time to be accessible to scientists.

So TIM can’t do its job without a networking device.

Which device best suits this role, and what does the setup look like? Check out this use case to find out. 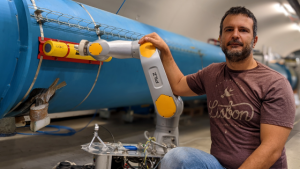 Luca Rosario Buonocore, research fellow, robotic engineer, and R&D project manager at CERN, had the following to say on the collaboration:

“For a long time, we searched for a connectivity device that could fulfill the many requirements of both CERNbot and TIM.

The connection it provides must be secure, VPN and all, and I/O versatility was key.

Since these robots run on batteries, low power consumption was also paramount.

Teltonika Networks had a device that satisfies these specifications and has been performing excellently since day one, letting us control the robots seamlessly and with no latency or interruptions.

We look forward to continuing our collaboration with Teltonika Networks and upgrading the devices currently employed as new and improved ones that better fit our technological needs become available on Teltonika Network’s catalog.”

Find out exciting news and more about our products every week at varia.org/blog !